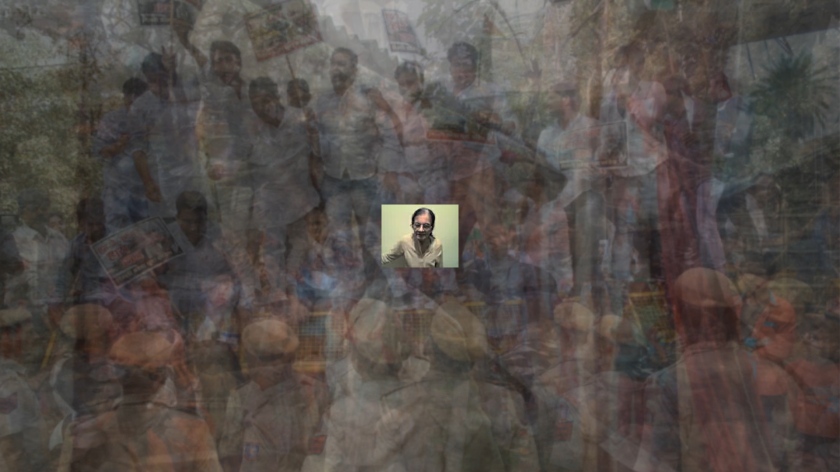 An evening of performance and video by Gautam Kansara and Seline Baumgartner.

Through video and performance, Kansara will draw upon family histories that reach back to the Quit India Movement in India in the 1930’s and 1940’s to illustrate the mythic nature of Switzerland in the Indian psyche, and specifically within Kansara’s family as a land opposite to India, where disease is curable and poverty non-visible. The stories will center around the contraction of Tuberculosis by Kansara’s grandmother who was treated at the Wald Sanitorium in Davos in the late 1940’s, against the wishes of her father, the lawyer turned freedom fighter B.N Maheshwari. Throughout there work, Kansara will interweave history and storytelling to actively destabilize facts and fictions.

Seline Baumgartner’s works investigate the behavioral patterns of people in different social interactions using video and sculpture to carefully observe the grammar of individuality. During the evening Seline will present the video “Rosy” (2013), a collaboration with the Hijra (Transgender) Dancer Rosy, the Musician Sumathi Murthy and Pejk Malinovski. Based on interviews with the Hijra and Karaga dancer Rosy, the musician Sumathi Murthy wrote and composed a song about Rosy’s life, and the contradiction Hijras represent in Indian society. On one hand they have the gift to bless people are often invited to dance at weddings. Yet they are also marginalized, losing contact with their families, and living from begging or sex work. The video shows Rosy dancing to the song telling the story of her life, while an Indian wedding band, moved by Rosy’s story, plays and engages with her.

The Kulturhaus Helferei is located in the middle of the old town of Zurich. Adjacent to the Grossmünster Church, the building is the former home of Ulrich Zwingli, leader of the Reformation in Switzerland. Since 1974 Kulturhaus Helferei has offered a rich cultural program of theater, performances, literature, cinema, music and exhibitions. 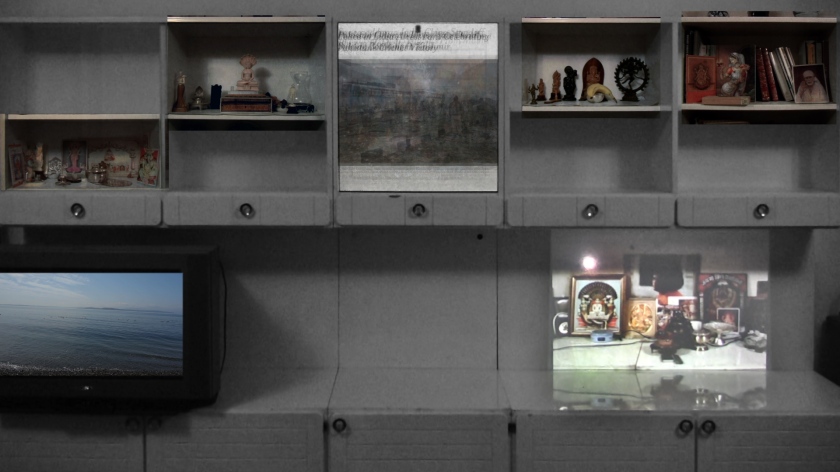 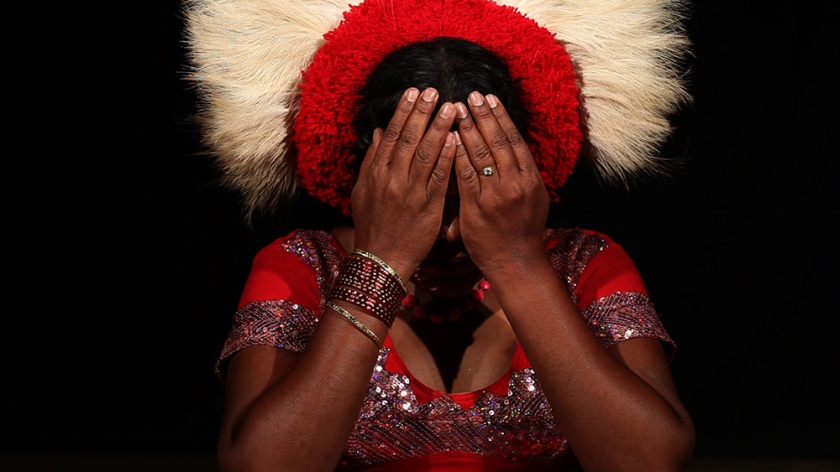 We are pleased to announce the Art Alumni Show, our inaugural exhibition featuring the works of alumni who have graduated from the Department of Art and Art Professions. This exhibition will be curated by Chrissie Iles and will take place in The Commons, the beloved Barney Building exhibition space.

We invite alumni to submit an application for review and consideration for this show. Through this exhibition we would like to celebrate, recognize and bring together the alumni community.
Artist: 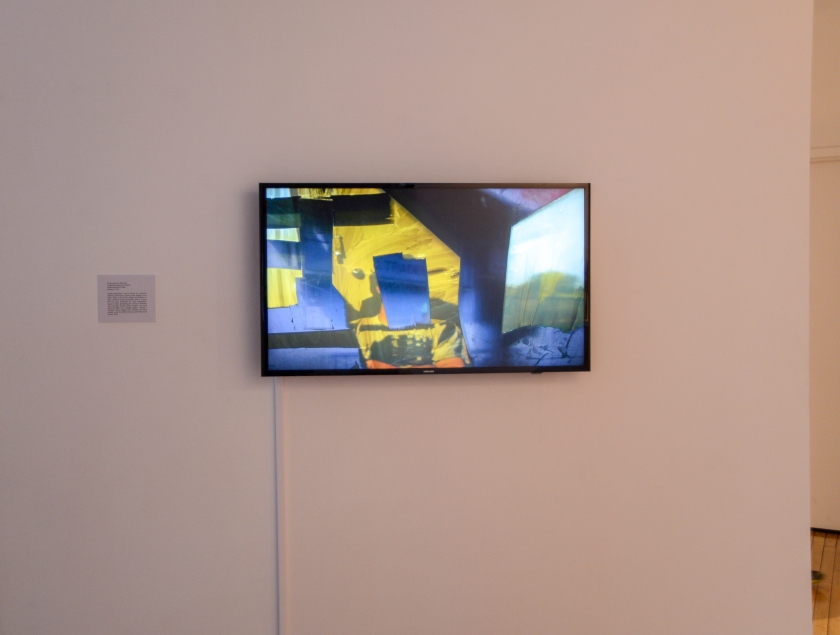 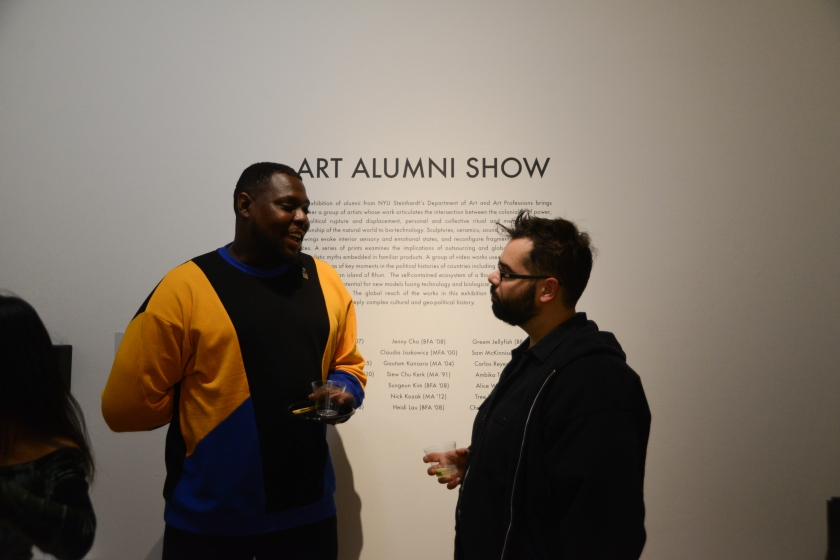 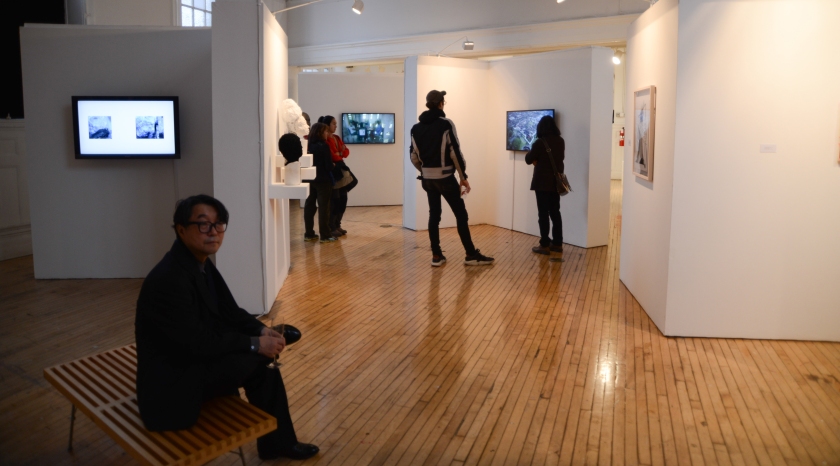 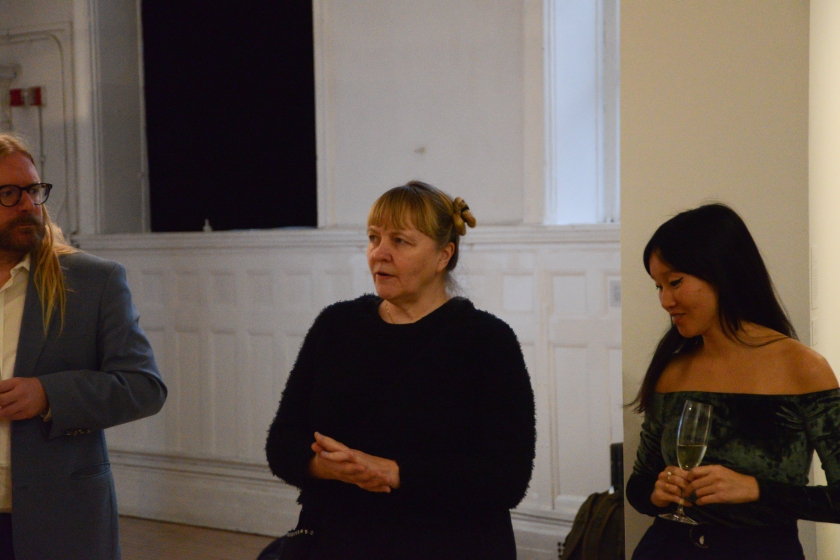 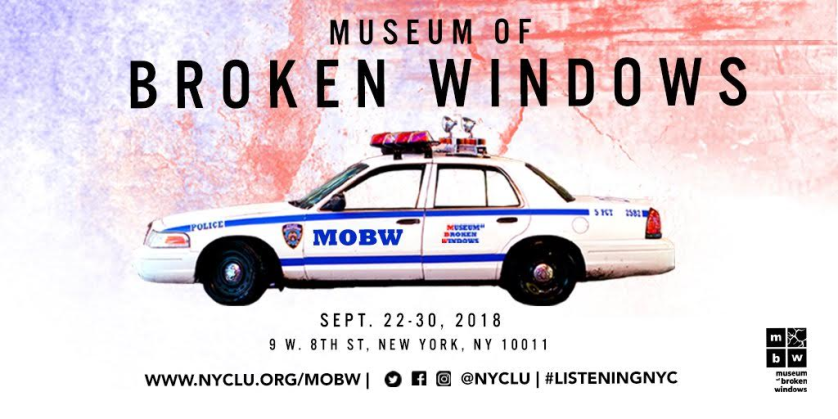 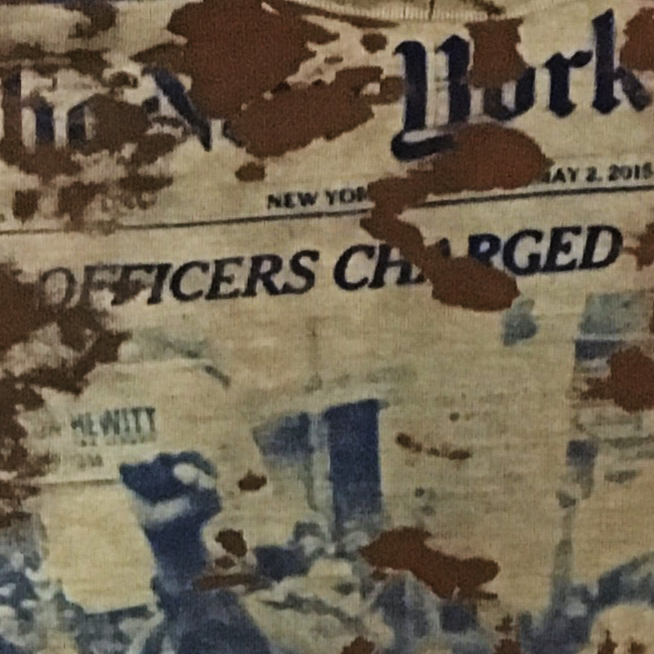 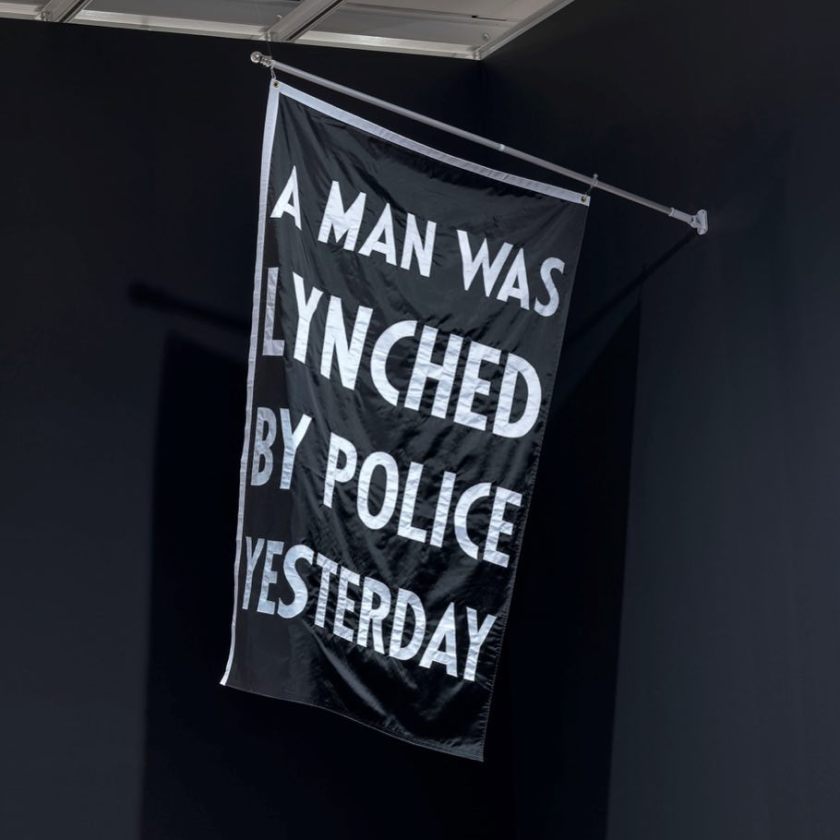 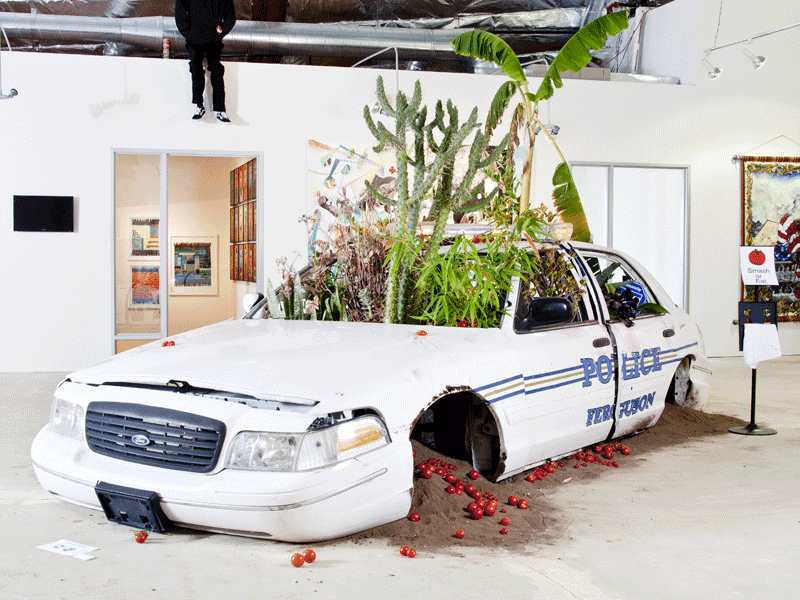 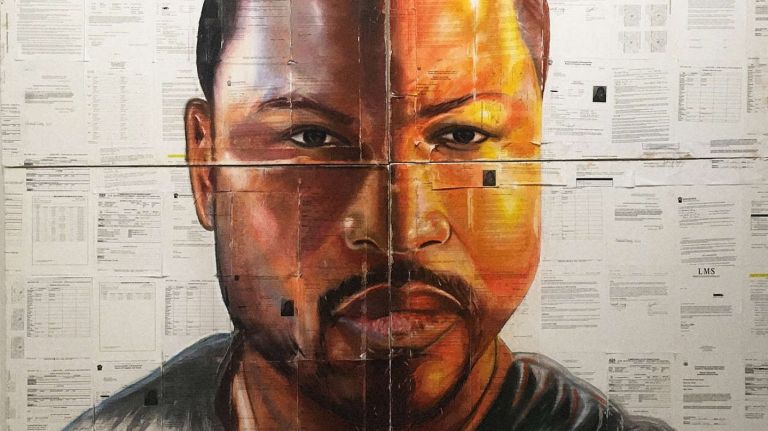 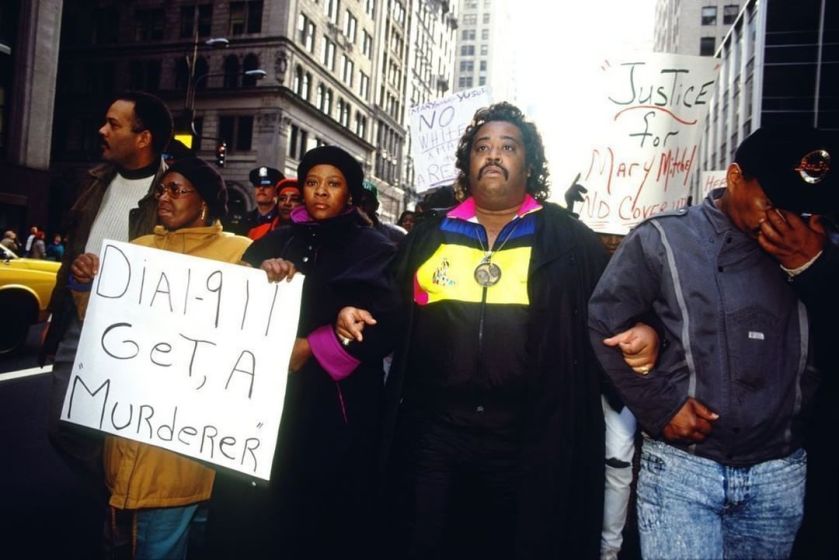 GAUTAM KANSARA, “WEARING THROUGH NEWS” (DETAIL)
A COLLECTION OF CYANOTYPE IMAGE TRANSFERS ONTO T-SHIRTS MADE UP OF ‘IMPORTANT’ HEADLINES FROM THE FRONT PAGES OF THE NEW YORK TIMES (AS SIGNIFIED BY THE EDITORIAL DECISION TO USE BOLD-FACED CAPITAL LETTERS.) AS KANSARA’S DAILY UNIFORM, THE LIFESPAN OF THE SHIRTS IS INTENTIONALLY SHORTENED BY BLEACHING AND TONING, WEAKENING THE FIBERS SO THAT THE IMAGERY DETERIORATES THROUGH WEARING AND WASHING, A REFERENCE TO THE TEMPORARY NATURE OF STORIES AS THEY RISE AND FALL WITHIN THE CONFINES OF THE NEWS CYCLE. AS THE WEARABLES FADE, THE STORIES MORPH, ALLUDING TO THE FRAGILITY OF MEMORY, PEOPLE’S TRANSIENT EMPATHY, AND THE WHITEWASHING OF HISTORY.

DREAD SCOTT, “A MAN WAS LYNCHED BY POLICE YESTERDAY”
IN RESPONSE TO THE MURDER OF WALTER SCOTT, DREAD SCOTT UPDATED THE ANTI-LYNCHING BANNER THAT THE @NAACP FLEW FROM THE WINDOW OF ITS HEADQUARTERS IN THE 1920S & 30S.

JORDAN WEBER, “HALF OF AN NYPD COP CAR IS JOINED WITH HALF OF A FERGUSON COP CAR TO LINK THE POLICE VIOLENCE BEING SEEN IN TWO DIFFERENT DISTINCT PARTS OF THE COUNTRY AND SHOW THAT IT IS PART OF THE VERY SAME SYSTEM.” —JORDAN WEBER.

RUSSEL CRAIG, SELF-PORTRAIT
RUSSELL CRAIG TAUGHT HIMSELF TO DRAW IN PRISON. WHEN HE WAS RELEASED, HE CREATED A SELF-PORTRAIT ON SEVEN YEARS WORTH OF COURT AND PRISON PAPERWORK. 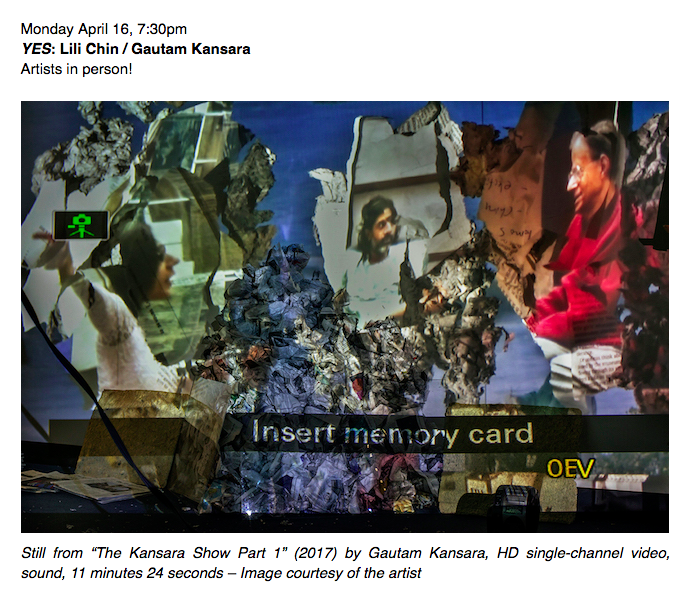 Microscope is very pleased to present a screening night of videos by New York based artists Lili Chin and Gautam Kansara as part of the gallery’s series YES.

The two artists, who have previously appeared in group screening programs presented by the gallery, not only work with single-channel works but have expanded their practices over the years to include split-screen and multiple channels as well as multi-media installation, often questioning and challenging the traditional concept of screen, incorporating various surfaces and textures including paper, glass, mulch, and others.

Storytelling, memory, nature, and current affairs and post 9/11 politics in the context of personal history and culture are also areas of interest for both artists, who despite their similarities take different approaches in their works.

Kansara frequently employs layering of imagery, revealed through erasure and other techniques involving the use of green screen, and incorporating actual conversations of himself with family members about various personal and political subject matters. Chin, on the other hand, remains behind the camera as an observer, recruiting friends as actors in some of the works, while in others animating or engaging with ceramics and artworks in other mediums by the artist. Many of her works are shot on film – Super 8mm and 16mm – and the materiality of the medium plays a critical role.

Lili Chin is an artist based in New York City.  Chin’s work has been exhibited internationally in galleries, museums and project spaces in diverse locations ranging from New York to Ecuador, Mexico City, Scotland, Shanghai, Beijing and more. In 2013, her work ‘Looking Glass’ was commissioned by the He Xiangning Art Museum in Shenzhen, China. She has attended numerous artist residencies, including The Studios at Mass MoCA and the Swatch Art Peace Hotel in Shanghai. Her works have screened at institutions, film festivals, and other venues including Anthology Film Archives, New York, NY; Millennium Film Workshop, New York, NY; Microscope Gallery, Brooklyn, NY, and Aurora Picture Show, Austin, TX , among others. She attended the Skowhegan School of Painting and Sculpture in 2010 and holds an MFA from the University of California, San Diego. 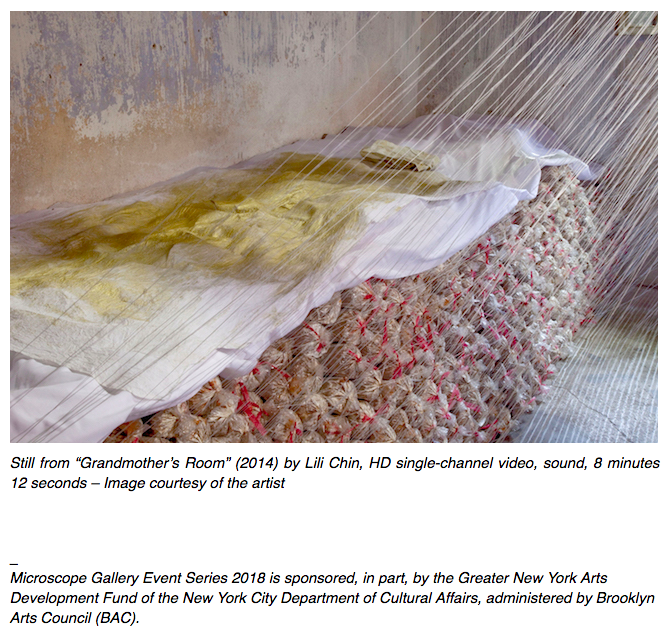 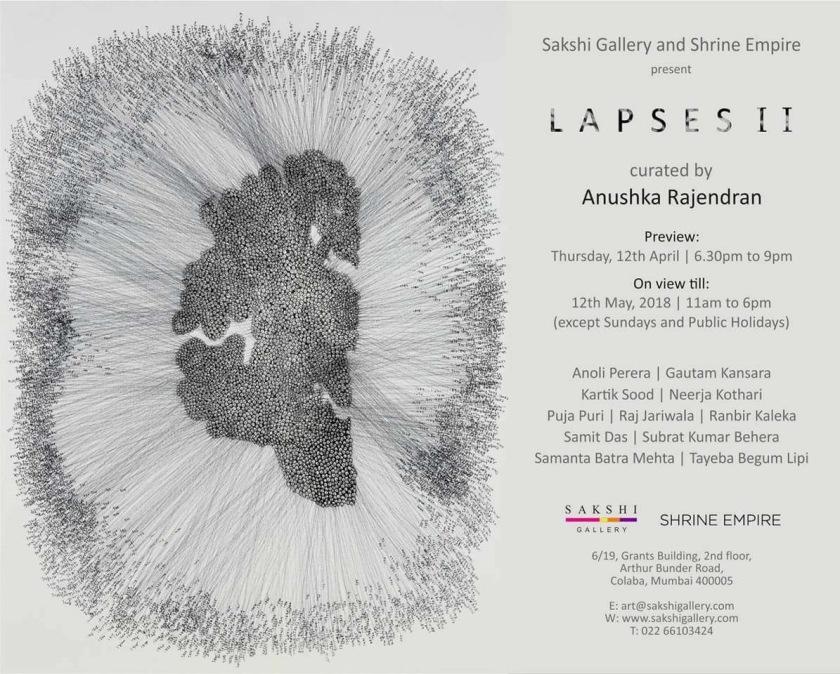 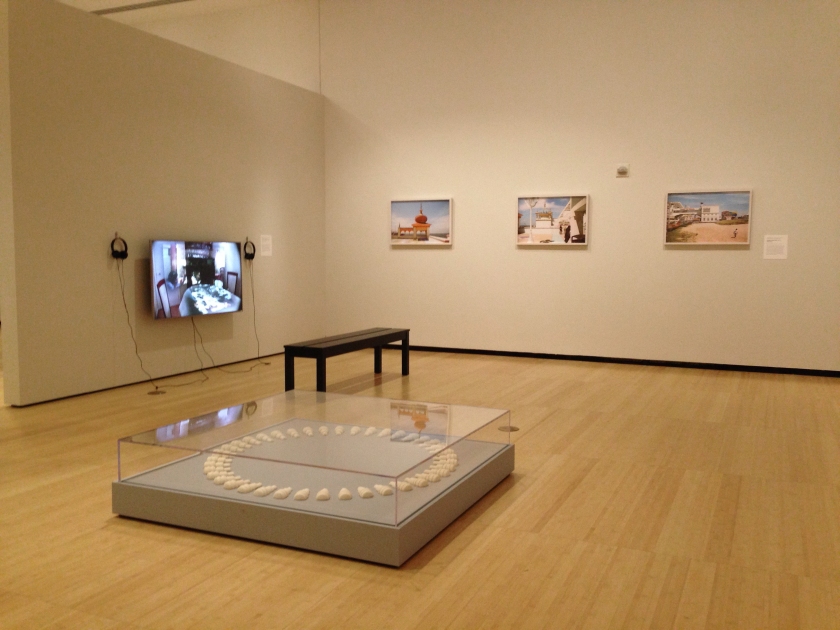 “For immigrants, the children of them, and anyone of South Asian descent, this exhibit is no less than a love letter to you.”
Odyssey

Asia Society Museum in New York shines a spotlight on the work of nineteen contemporary artists from the South Asian diaspora. As individuals living between worlds, diasporic artists often negotiate notions of home and issues relating to migration, gender, race, and memory in their practice. Lucid Dreams and Distant Visions: South Asian Art in the Diaspora, organized by Asia Society Museum with the support of the Smithsonian Asian Pacific American Center, will be on view from June 27 to August 6, 2017.

On the occasion of the seventieth anniversary of independence of the Indian Subcontinent from the British Empire, this exhibition, first proposed by Jaishri Abichandani, founder of the South Asian Women’s Creative Collective, provides a timely platform to celebrate these artists and their diverse perspectives, notably in response to the recent rise of nationalism and xenophobia that has swept the globe.

“Seen in the context of the turbulent state of affairs for immigrant populations, the work of diasporic artists working and living between worlds has taken on a new urgency in counterbalancing the retreat into simplistic identity politics and xenophobia,” said Boon Hui Tan, Asia Society Vice President for Global Arts & Cultural Programs and Director of Asia Society Museum. “Through a number of mediums, including photography, sculpture, and video, the artists featured in Lucid Dreams and Distant Visions challenge prevailing stereotypes and assumptions of South Asian identities in the United States today.”

The artists reflect the diverse demographics of South Asia and their work engages the nuanced cultural specificities of the region, as well as the racial and cross-cultural tensions in the current sociopolitical climate.

The artist selection was made by Boon Hui Tan and Lawrence-Minh Davis, Curator, Smithsonian Asian Pacific American Center. Together they formed the curatorial committee with Abichandani and Michelle Yun, Senior Curator for Modern and Contemporary Art, Asia Society.

A two-day symposium organized in conjunction with the exhibition brings together South Asian American artists, curators, and academics to discuss the state of the field and to identify strategies to bring the work of contemporary South Asian artists and cultural practitioners to a broader audience. Titled “Fatal Love: Where Are We Now,” the symposium is co-organized by the Queens Museum and the Smithsonian Asian Pacific American Center, and will be held at the Queens Museum on July 1 and 2. The keynote panel for the symposium will be held at Asia Society Museum on the evening of June 30, preceded by a reception for the exhibition.

Lucid Dreams and Distant Visions: South Asian Art in the Diaspora is made possible by the generous support of the Smithsonian Asian Pacific American Center. Critical funding is provided by Burger Collection, Hong Kong. 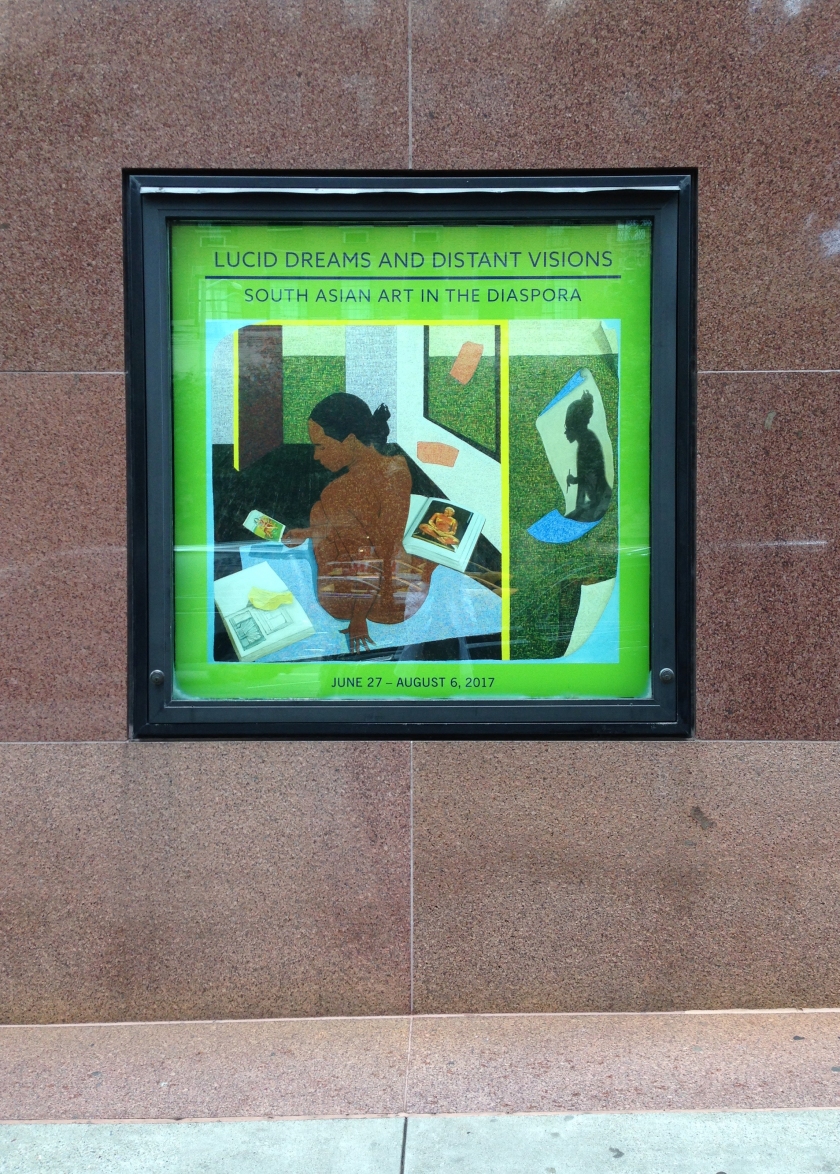 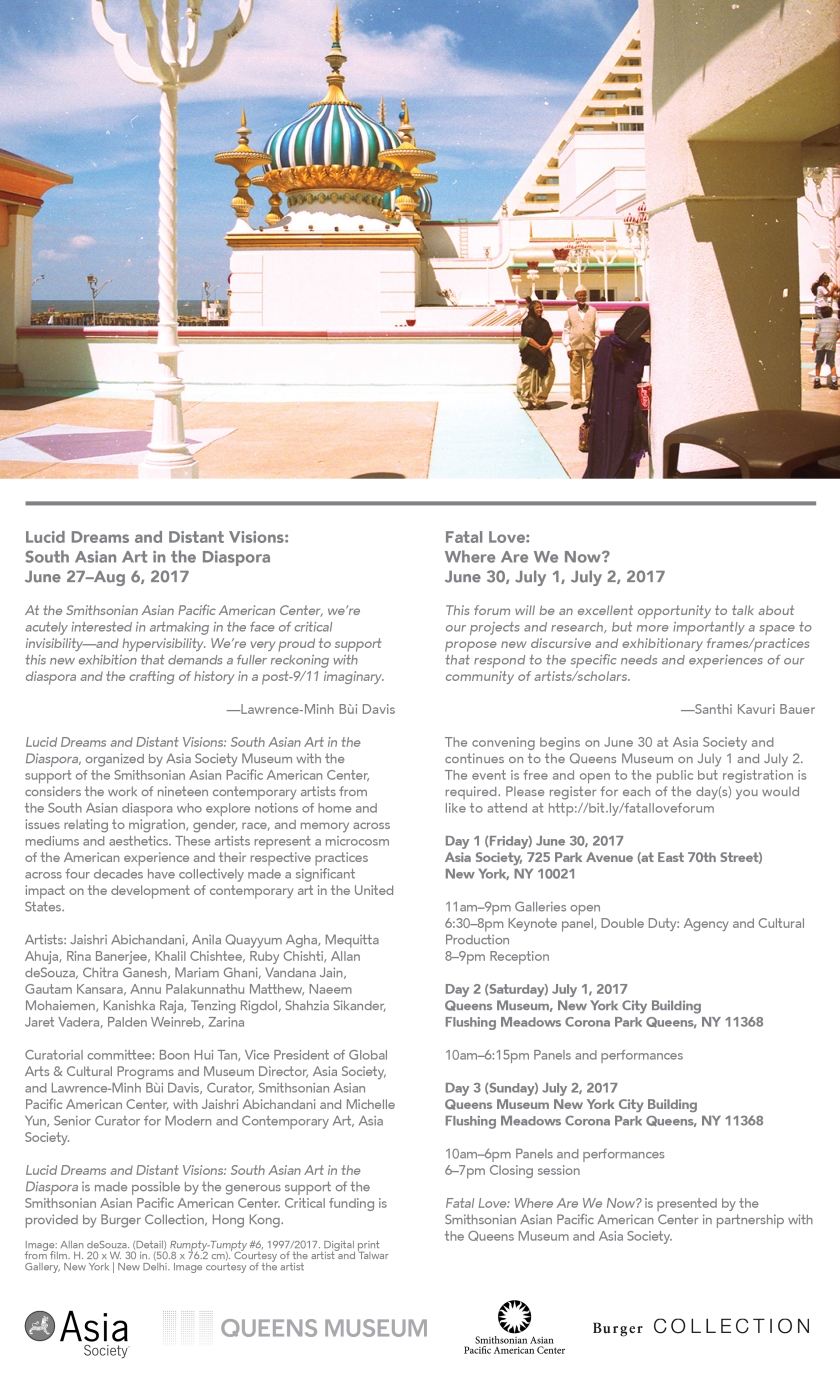 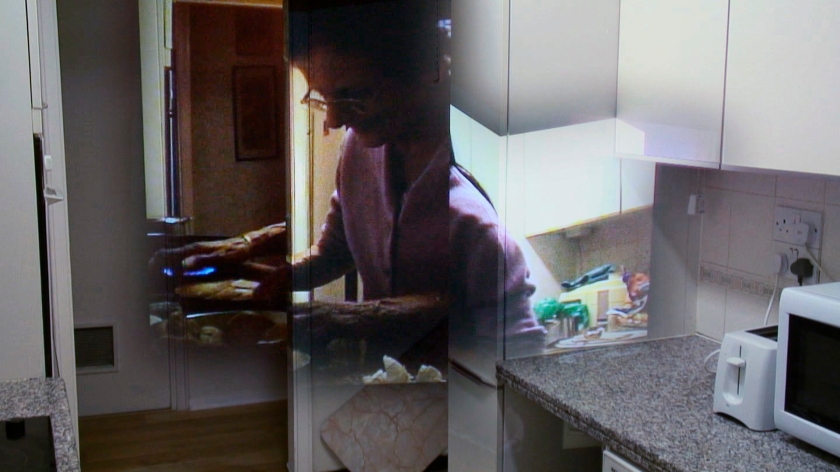 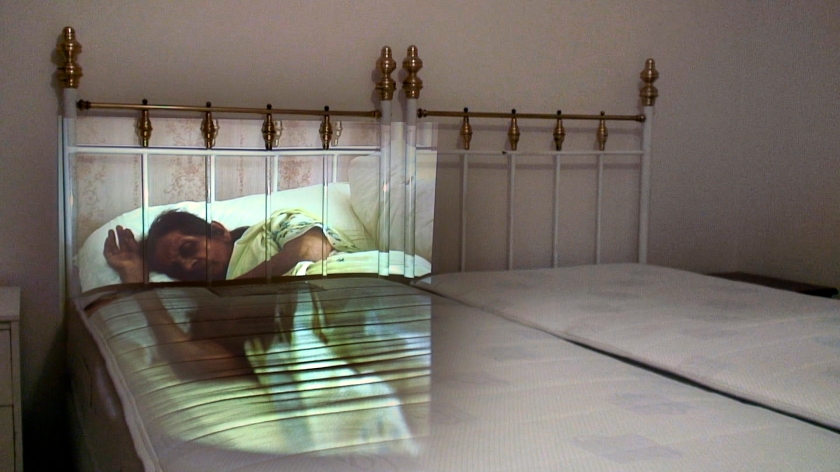 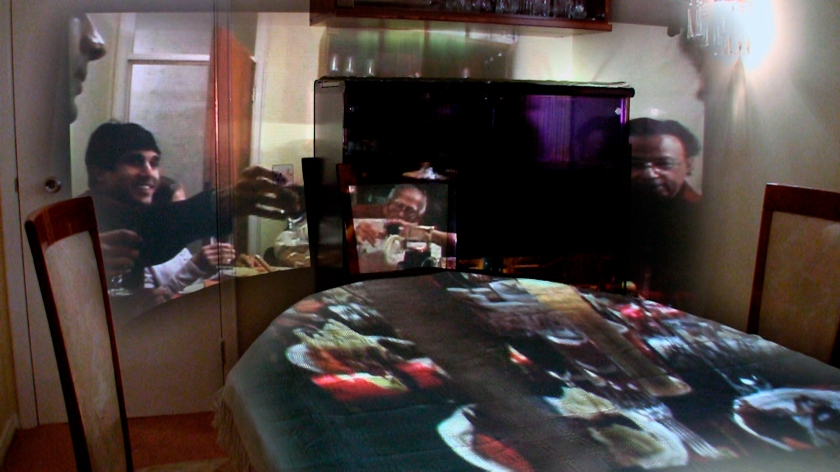 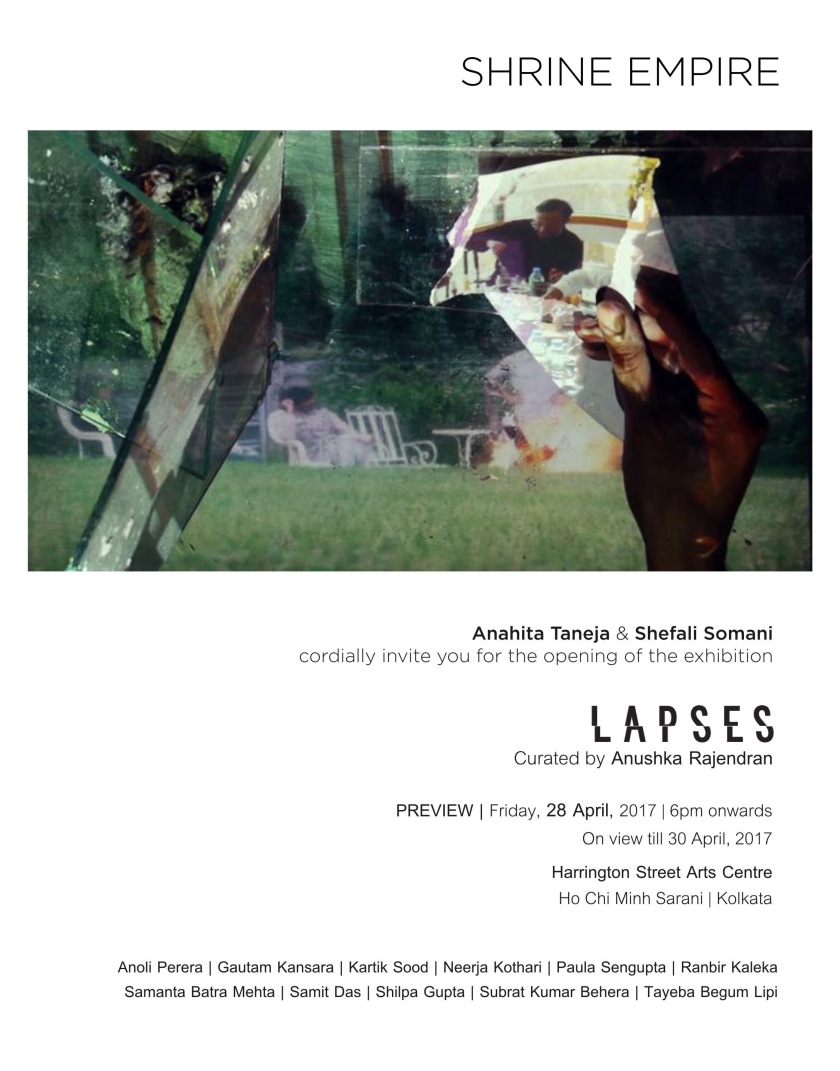 “Many years later, as he faced the firing squad, Colonel Aureliano Buendía was to remember that distant afternoon when his father took him to discover ice.”

The processes of memory are random. Quite literally tangled. Neuroscience has sifted through pathways in the brain linked to memory to find that they are all over the place; an absurd process of cataloguing unrelated objects in a hoarder’s den.  Phenomenologically, a strong sensorial cue emanating from an individual’s environment could unleash a flood of unrelated memories. Just as Colonel Aureliano Buendía, as he was facing the firing squad. Empirical data and the archaeologies of cognitive science are yet to unveil a teleological narrative, the manuscript of fate penned by Melquíades. The overarching imprints that we are left to work with are fluorescent patches assembled in the shape of a brain, dispersed tangles of calcium pathways in mice brain, low resolution MRI scans and Positron Emission Tomography. Memory is yet to yield anatomical diagrams in biology textbooks, unlike other mystical phenomena such as the heart that pumps blood, or the mitochondria that fuels the cell. Epigenetics tells us that we inherit history in our genetic material, like a newly appointed curator inheriting a museum’s collection, a palimpsest of time. Destiny has it that a ‘tangible’ memory is entirely its external referent — its material correlates and learned linguistic associations made by stories that evoke the mind, identity, nostalgia, déjà vu — both tautologically looping into the sensorium to reinforce neural pathways. Like a totem, we embalm and contain in the physical shape of a perfume bottle, a memory related to its fragrance. Then there is the totem we inherit from our ancestors, perhaps as a relic, a funerary rite, a fetishized object in the guise of a family heirloom or fear of persecution coded into our DNA. The closest visual/tactile/sensory map we have of historical memory is the museum and of personal memory, a cabinet of curiosities. A life is its objects and the longing for them, tangible or elusive. This exhibition consists of a series of artworks that lend memories their object-hood, saving them from the lapses in our collective and personal memory. 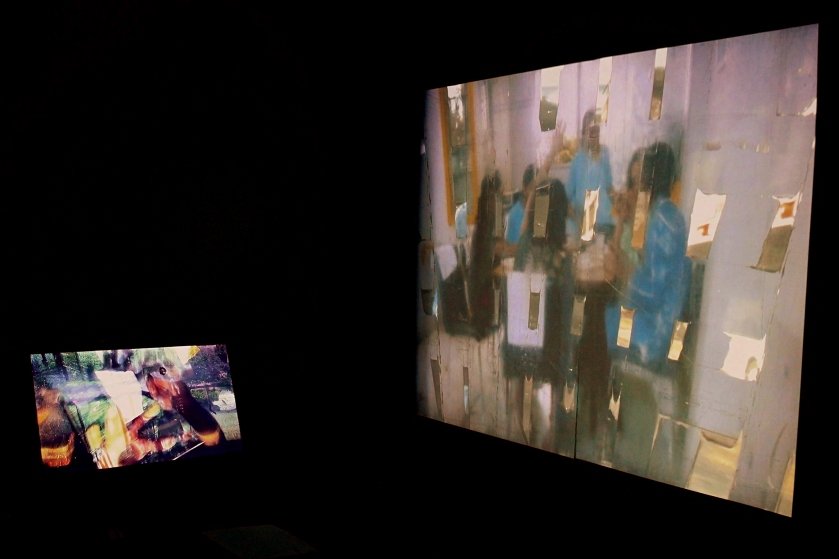 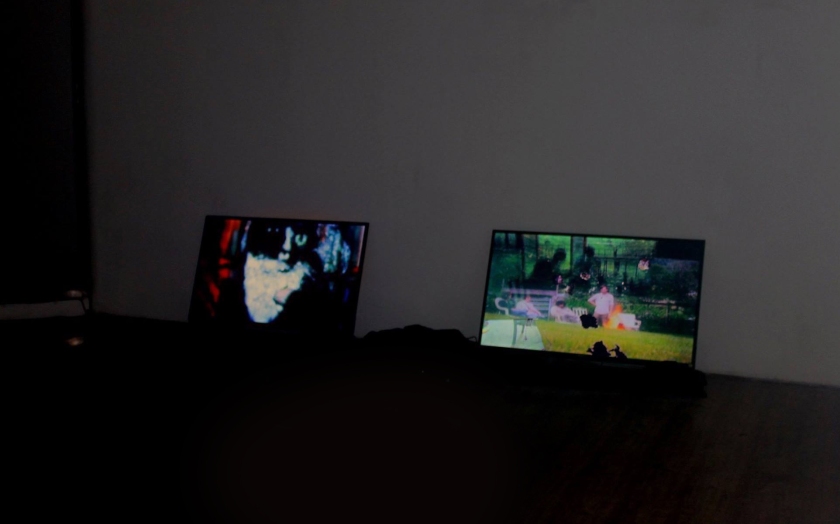 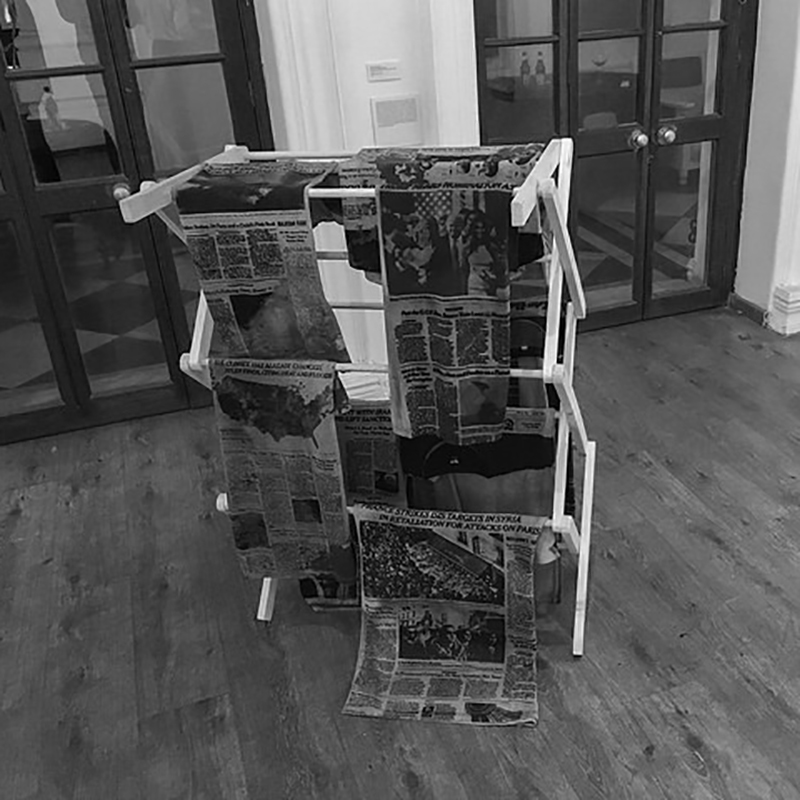